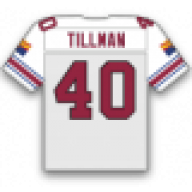 PRESCOTT - Cardinals strong safety Adrian Wilson spent part of his summer chatting it up on national sports talk shows. He even had his first "gig" as a correspondent for the Jim Rome show.

What he heard during the gab-fests was a buzz about his team that he felt was well-deserved.

"There should be (some buzz)," Wilson said. "We've got a team that's definitely on the rise. We're hungry to win."

If the Cardinals are an eager bunch ready to take their games to the next level, then Wilson is the perfect poster boy for the team, especially on the defensive side of the ball.

The fifth-year pro out of North Carolina State was second on the team last season with 99 tackles, including a career-high 76 solo stops, and added three interceptions and three fumble recoveries. Near the end of a season that nearly landed him in his first Pro Bowl, the team's third-round pick in the 2001 draft was rewarded with a big contract extension that will keep him in Arizona through 2009.

The Cardinals hope to collect on that investment this season. “Adrian can be one of the best in the game,” Cardinals coach Dennis Green said. “He has great range. He's very physical. He's plenty tough and he has ball-hawking instincts. Hopefully he'll have that kind of (Pro Bowl) year.”

Wilson is certainly set up for such a season.

The Cardinals’ defense is designed to allow the strong safety to make a lot of plays and Wilson is as capable as anyone to make them.

Although he is 6-foot-3, 230 pounds, Wilson moves smoothly and flies to the ball. And when he gets there, he's not afraid to hit. Fortunately, he's also very durable, as he's missed just two games in four years with the Cardinals.

“I definitely take pride in (my durability),” Wilson said in his deliberate southern manner. “It's a hard position to get down with the big boys, the linemen and the big fullbacks.”

Wilson will be mixing it up with the big boys more than ever this season as he'll play closer to the line of scrimmage, in part to help the Cardinals shore up a defense that surrendered 131.6 rushing yards per game to rank 27th in the league in 2004.

Though the hype is building around him, Wilson isn't exactly sitting around waiting to reach the next level.

“He's a sponge, soaking everything up. So he's going about it the right way,” said veteran free safety Robert Griffith, who has helped tutor Wilson since arriving as a free agent this offseason. “It's funny because you don't normally get a guy his size who can move like that. He's got all the tools, it's just up to him to go out and have a good year. He's got all the ability in the world.”

The question is whether that ability will translate to a Pro Bowl bid this season.

Wilson said he thinks it's dependent upon the defense improving as much as it's expected to and upon the Cardinals making the playoffs. After all, last season's impressive output wasn't good enough on a non-playoff team with a middle-of-the-pack defense.

“I think I got robbed last year,” Wilson said of missing out on the Pro Bowl. “The first goal is to help the team make the playoffs. My goals are team-based because if you win, the individual goals will come.”

http://www.eastvalleytribune.com/index.php?sty=45834
You must log in or register to reply here.

A
'He made the program better': Alabama honors Charlie Wilson

A
As Jets face a potential franchise-changing QB decision, Zach Wilson may be getting his final shot

I have a ? regarding a Play of Ours with 2 minutes left

A
Seahawks have won Wilson trade by a landslide