Activision will release the brand new Spidey game Ultimate Spider-Man on Tuesday, September 26th. In the game, you'll be able to play both sides as you can take on the role of super hero Spider-Man AND super villain Venon. Written and illustrated by famed comic book creators Brian Michael Bendis and Mark Bagley, the game picks up right where the story left off. Dive into an immersive adventure as you experience a living comic book illustrated with 3D Comic Inking Technology™ that literally brings the comic to life in every action-packed frame.

The game's expanded, free-roaming environments deliver a deep adventure with a variety of challenging missions, diverse game play and an improved combat system that allows players to face off against the largest number of characters from the Spider-Man universe ever assembled in one video game. Ultimate Spider-Man will be available for the PS2, Xbox, GameCube, Nintendo DS, PC and Game Boy Advance.

Superhero Hype! got a chance to talk to Treyarch's Chris Busse, Creative Director of the game:

SHH!: You've got Brian Michael Bendis creating the story for this game. Tell us how this changes the dynamic of this Spidey game over the last games.

Chris Busse: Having Bendis and Bagley on board lends an authenticity to our game. It has allowed us to really capture the look, feel, and voice of Ultimate Spider-Man in a way that would not have been possible without their involvement. Both of these guys were intimately involved with the project. Bagley has provided character sketches for all of the characters in the game and was key in creating the Ultimate versions of the two characters that hadn't yet appeared in the books. Bendis was crucial in crafting the story and writing all of the dialogue. It was a true collaborative effort between us, a real pleasure all around.

SHH!: Tell us about the cast of characters and why you chose Venom over say, Green Goblin or Doc Ock as a playable character.

We chose Venom because it's a story we hadn't had a chance to explore yet. Venom is a huge figure in Spider-Man's world and it seemed right that we get him into our game. Additionally, we wanted to do a story arc that fit within Ultimate canon, and at the time we were crafting the story, the Venom arc was very fresh, and had a lot of potential for creating a compelling arc.

SHH!: We hear that the game will essentially fit right into the storyline from the Ultimate Spidey books. Care to give us a taste of the storyline in USM?

Busse: The storyline in USM is essentially Spider-Man, Eddie, and the rest of the Ultimate Marvel universe dealing with the birth of Venom. He's a major super power and when he came onto the scene it seemed right to explore the impact this would have on the world.

SHH!: What has been the most challenging aspect when developing the game?

Busse: Shipping any title is challenging; but when you are dealing with a licensed property, one of the more challenging things is finding that sweet spot between being true to the license while making it something that people who don't have the first clue about Ultimate or even Spider-Man can pick up and enjoy.

SHH!: Can you talk a little bit about some of the objectives that Spider-Man (or Venom) face in the game?

Busse: Objectives? Ultimate Spider-Man is more about trying to capture the feeling of a living 3D comic book: trying to give the player that sense of being in control of an interactive comic book story. Sure, there are things for Spider-Man and Venom to accomplish to move the experience forward. I'd like to think that players are going to remember kicking Rhino's butt as Spider-Man or completely destroying Times Square while fighting Electro over the right to kill Spider-Man as Venom over just a list of objectives, though. 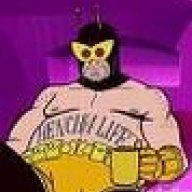 Location
On a flying cocoon

I'm getting it later today. I can't wait.

After this and the other 4 games I got this week (Evil Dead: Regeneration, MK: Shaolin Monks, X-Men Legends II, and Marvel Nemesis), I'm wondering if I'll see the light of day ever again
R

I have the last Spiderman game, and while it was cool to explore the city, the game was pretty BLAH
You must log in or register to reply here.