If the objective is to finally win a Super Bowl

We are the Cardinals (duh) and have been to only one Super Bowl but have won no championships in the modern era. One does not have to think about this for long to maybe act a tad more desperate to insure your percentages of winning. I sincerely believe Michael really wants to win, I like Michael, but damn it man throw down some more and get that first trophy. Sign Clowney, sign a Landry and stop skimping by hoping you can win when the odds say we have not done enough. Crap happens, so prepare and do it now in a NFC which appears to be in flux... use a freaking sledgehammer to drive in a nail because we really can have a chance to win that all elusive prize 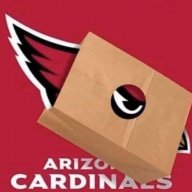 Landry has been signed
OP
OP

Shane said:
Landry has been signed
Click to expand...

Well, is Julio still unsigned at the playground or does he have a team lol
Last edited: May 16, 2022
You must log in or register to reply here.

A
Who is the youngest quarterback to win a Super Bowl in NFL history?

You do not win the Super Bowl unless

A
Which city deserves to win Super Bowl the most?