Coyotes lose to the Blackhawks

Jeff Hamilton had his second career hat trick and added two assists to lead the Blackhawks to a 7-5 victory over the Phoenix Coyotes on Saturday night.

Bill Thomas, Mike Zigomanis and Jeff Taffe had goals for Phoenix, which lost its fifth straight and has recorded only two wins in its last 12 games (2-9-1).

Mikael Tellqvist gave up five goals on 17 shots in the first period, and Curtis Joseph stopped 12 of 14 shots he faced over the final 40 minutes for the Coyotes.

Terrible loss, but a fun game. First time my wife and I had been to the arena. Great seats, high-scoring hockey game with many fights and a few nasty injuries. 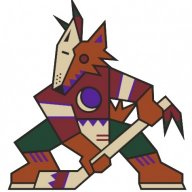 Fool In The Rain

Real disappointing loss tonight. Ever since the team brought the kids up they had been playing with fire against some quality teams, only to lose pretty handily against a very poor team in the Blackhawks. As it stands right now, the Coyotes will have the 3rd pick in the draft, so with a solid pick and a smart offseason to go along with their slowly growing stockpile of young talent, they could right the ship pretty quickly.

Glad to hear you and Mrs. BIM had fun at the arena tonight though

coyoteshockeyfan said:
Glad to hear you and Mrs. BIM had fun at the arena tonight though

We got to see Daniel Carcillo score his first NHL goal!

even those we got easily outplayed, that was one of the most exciting games ive been too that wasnt a close game. and then i learned that Koci was playing his first NHL game. he looked like a seasoned vet going against Gratton, although Gratton laid the wood to him a few times.

Sorry. I had to root for the Blackhawks this game since growing up they were my first love of any sport. I had a blast and have never seen so many fights in one game.

Jan 26, 2022
ASFN Admin
A
A
Chicago Blackhawks look shaky in a 4-2 season-opening road loss to the Colorado Avalanche